Will Wood: Psychology of country 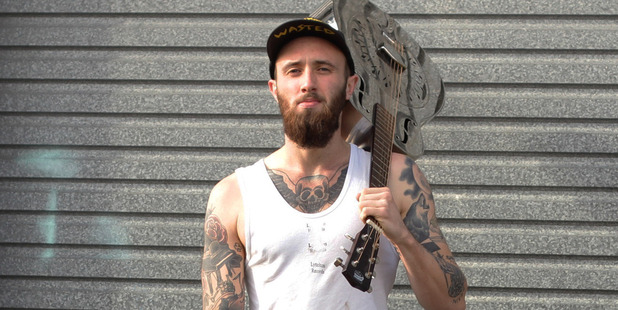 Will Wood is a man not easily categorised. The 25-year-old might have some staunch-looking tattoos, and a love for staunch-looking dogs, and he even drums in a hardcore punk screamo band called Parents when he has time.

But he's also a soulful country artist, with a debut album full of lively, heartfelt tunes being released this week, and an unexpected background as a classically trained pianist, violinist, and barbershop singer. Oh, and he's a mental health worker at Middlemore hospital.

It seems all these facets go easily together for Wood though, and somehow he's managed to juggle his work with touring the US, opening for The Handsome Family, Wagons, and Frank Turner, and recording his album.

"Working in mental health really stimulates you emotionally, because you get such a range of things happening in any given day. You get to see a lot of really beautiful human interaction, and you also see a lot of frustration, a lot of tragedy. It's really intense.

"I write a lot of my music while I'm at work. On a good day, I get to play a lot of guitar while I'm there - I teach a bit of guitar, and write songs, if it's not too busy. It's a great job, as a musician."

After a childhood of listening to classical music, and occasionally 90s pop filtered down through his older brothers, Wood actually discovered country music in an unlikely place - Grand Theft Auto.

"In a past life, I used to play computer games quite a lot, and the Grand Theft Autoseries has its own radio stations that you listen to when you're in the cars, and there was a country music station in one of the versions. That was pretty much my first big introduction to country music.

"I heard it and thought, that's actually perfect, it's exactly what I want - songs that tell stories. I think songs should always be about telling stories, and I think that's what puts me off some modern music. Or that's why I love country so much anyway."

He didn't immediately start writing his own country music though. First, he became a drummer - an instrument he picked up because his two best mates already both played guitar, and they needed someone to drum with them. That led - via contacts made while working at inner-city venue The Wine Cellar - to plenty of other gigs: "I ended up playing drums in four or five bands at a time."

So how has he ended up out front? A promoter friend, knowing of his songwriting sideline, asked if he would open for a band she was touring.

"I didn't want to do it, but she convinced me, and it went quite well, and I haven't really stopped. And somehow I ended up making a record."

Wood's songs are notable for their direct lyrics.

"I'm not so good at dressing things up in beautiful metaphors, so I end up being quite blunt. Performing them is quite intimidating, because they're blatantly about me, or me and a certain girl, and I find it a little bit worrying, baring that part of yourself to a whole lot of people you don't know. But I've never had anyone come up to me and say, 'Well that was dumb', so I guess it's okay," he laughs.

Indeed he's garnered a great deal of respect from fellow musicians -- enough that a number of them (Delaney Davidson, Dave Khan, Reb Fountain, Ben Wooley, Joe McCallum, Chris Winton and Tom Landon-Lane) helped record the album in Lyttelton with Ben Edwards. "I always had this idea that I really wanted a record that started with just me and the guitar, and then building up slowly along the way, adds bass, drums, horns, strings, until you end with these big arrangements.

"I can't believe how good the songs have turned out, and I feel like I can say that without being egotistical, because I did pretty much nothing and all these amazing people contributed this awesome stuff."

Where and when: Performing at the Wine Cellar, Sunday, September 21, and Golden Dawn, Tuesday September 23.