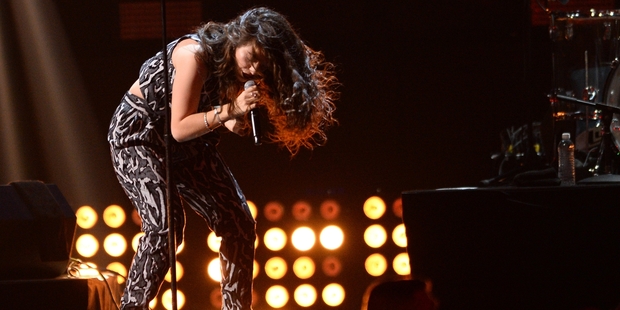 Taylor Swift has spoken about her friendship with Lorde, calling her a "very special girl".

The pair headlined this weekend's iHeartRadio Music Festival in Las Vegas, where Swift revealed how she first met the Royals singer.

"She had gotten my number from a friend of hers. I had sent her flowers for her album coming out because I loved her music, I loved her song. It kind of stemmed from there," she told ZM radio host Jay Reeve.

"We were both in New York at the same time, so she took a cab over to my hotel and we walked and got burgers in the park. From then on it was sort of just, you know, pals."

Some have described the friendship as an unlikely pairing but Swift sees a kindred spirit in the Kiwi singer.

"We became friends immediately, as soon as we met," she said.

"On the surface we may seem different but we're not really. Not seriously. In terms of friendship and loyalty, we're very similar."

The pair didn't get a chance to catch up in Las Vegas as they headlined separate nights.

Swift opened the two-night event on Friday, performing her hit single Shake It Offto a sell-out crowd, before jetting back to Los Angeles.

The 17-year-old is in the midst of a US tour, before she heads home to play four shows here next month.

She once revealed that her secret to big hair is just not washing it.

Whatever Lorde was doing on Saturday night, it was working, because her immense and curly brunette tresses took on the appearance of a lion's mane as she performed on stage.

The 17-year-old Royals singer was part of the line-up for the iHeartRadio Music Festival in Las Vegas, Nevada.

Her wild curls were seen flapping and flailing around her head as she gave her usual animated performance on the star-studded stage.

It was out and untied and entirely unrestrained.

Lorde was dressed in a chic grunge ensemble; a two-piece pants suit and crop top made up of tailored grey and black patterned fabric.

She wore patent black leather boots and flashed a slice of midriff as she belted out her tunes.

Her lips were painted with her signature dark lipstick, and she was seen throwing her head back in the same wistful and unique form that her concerts tend to take.

Lorde's fluffy hair has in fact become a part of her image, and is no doubt something that young girls who look up to her try to replicate.

The New Zealand native recently told MTV the secrets behind her birds nest 'do.

"My hair is wild," she confessed. "What you do to maintain it is don't wash it that often; once every two weeks is a good vibe."

She went on to concede that this was not exactly an ideal situation.

"It's disgusting,' Lorde declared. 'It probably smells awful and [is] like really knotty."

It was the second part of a two-day festival in the hot desert city.