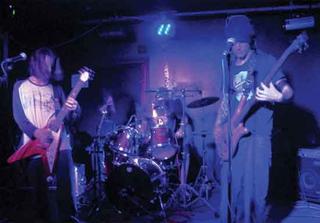 are an original alternative trio based in Auckland,New Zealand. The band has been forging their own path, building a reputation as a powerful live act with a strong DIY mentality.

Sairalei give it their all in their live show, channelling the elemental force of the music they create into an entertaining and blistering spectacle that rocks like only they can.
Always the consummate professionals, the band has played consistently across the greater Auckland area on a fortnightly basis for the past year and a half with bands such as:
• Mile (playing Big Day Out ‘10) http://www.myspace.com/milehighnz
• Hangman http://www.myspace.com/hangmanbandnz
•Sonic Altar http://www.myspace.com/sonicaltar

In fact, the overall listen never seems to sit in one place, “Dead before dawn” and “The ballad of El Mar Muertos” are dark brooding moods that find themselves having thicker tones allowing Dan Wood (who mixed and mastered) to vocalize with plenty of space, more of that would be nice. Stand out track for me is “Vulture”. This EP is going to make you find peace or smash someone’s face in.